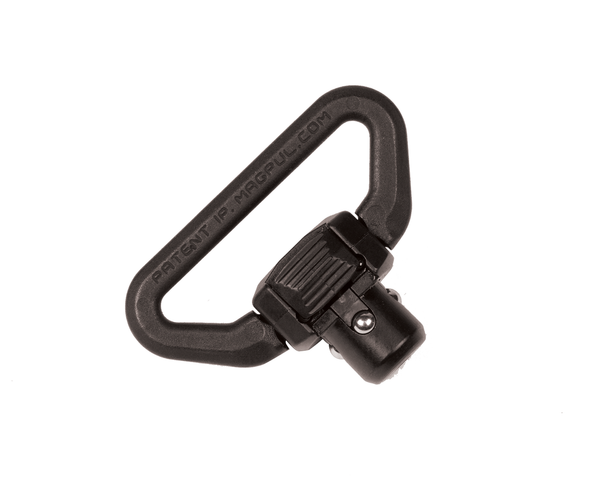 Magpul QDM or Quick Disconnect Magpul (just a guess) is the equivalent of a QD swivel on steroids.  The QDM swivel is ruggedly and purposefully built for slings. The Magpul QDM is made from Melonite treated steel, corrosion resistant, fits all standard QD swivel studs and works with 1 ¼ inch slings. The Magpul QDM does not use the single push button that is commonly found on most QD swivels.  Instead, the QDM uses a 2-point button design to avoid accidental ejection.  This feature essentially locks the swivel in place while allowing for a “quick” unlock if you desire to disconnect it from your weapon. Another upgrade is the hexagonal shaped bail (the part where the sling loops through) to keep the sling from rolling or bunching.  Additionally the shorter bail works with minimal clearance.  That’s great news for use with end plate mounts such as the ASAP-QD. The QDM is still operable with one hand and rotates 360 degrees.  The new design does allow the sling to sit flatter against the weapon than other designs allow. The Magpul QDM is stronger, safer, more rugged, more compact, and doggonit people like it.

MSRP: $14.95
Now: Now $14.20
Was:
MAGPUL QD Sling Swivel The Magpul QD Sling Swivel is a push-button quick-detach swivel for 1-1/4" webbing. It is compatible with QD sling attachment points. Made of manganese-phosphate finished...
MAG540-BLK

MSRP: $59.95
Now: Now $56.95
Was:
Magpul MS1® Padded Sling The Magpul Padded Sling - MS1® is the newest and most comfortable sling in the MS line. Magpul added a padded section of variable-width tubular webbing to...
MAG545