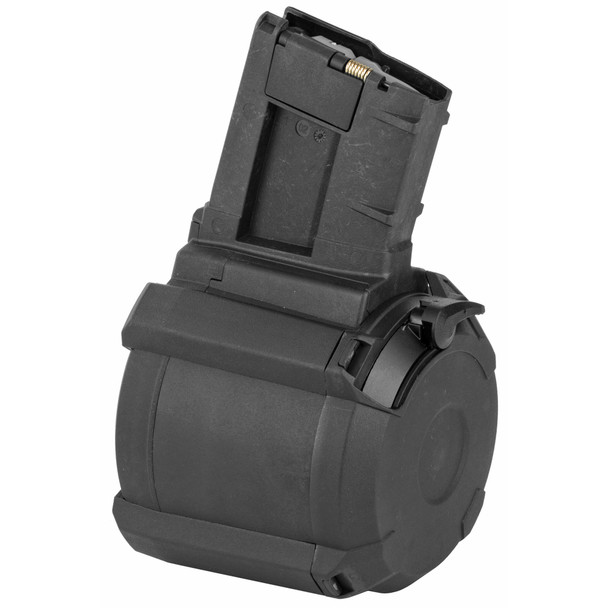 MADE & ENGINEERED IN THE USA

The Magpul PMAG D-50 is a rugged, lightweight 50-round polymer drum magazine designed for 7.62x51 NATO/.308 Winchester ammunition for SR25/M110 pattern rifles. It's capable of using longer-than-SAAMl-spec match ammunition. up to 2.830" OAL, such as M118LR. Engineered to the same exacting standards as the famous Magpul PMAG and PMAG D-60 drum magazines, the D-50 continues the PMAG tradition of high-capacity performance and dependability.

A ratcheting loading lever removes spring tension, making the D-50 easily loadable by hand. An anti-glare translucent window on the rear of the drum makes for quick positive visual indication of remaining ammunition. Additionally, the D-50 can be disassembled quickly with a simple flat blade screwdriver or similar tool and it comes with a dot matrix pattern that allows for easy marking and identification.

At approximately 1.7 lbs empty, and 4.5 lbs loaded, the Magpul D-50 is one of the lightest 5O-round 7.62x51/.308 drums available, and it's priced well below the current competition. The D-50's unique drum configuration gives it roughly the same overall height profile as a standard 25-round PMAG, making storage easy and shooting from various positions--including prone--no different than with smaller capacity magazines.

This product is restricted in the States of California, Colorado, Hawaii, New Jersey, New York, Maryland, Massachusetts, Washington DC, and Chicago, IL and may be restricted in other local jurisdictions http://www.handgunlaw.us/documents/NoHiCapChemSpray.pdf

MSRP: $27.95
Now: Now $25.95
Was:
Magpul QDM Magpul QDM or Quick Disconnect Magpul (just a guess) is the equivalent of a QD swivel on steroids.  The QDM swivel is ruggedly and purposefully built for slings. The Magpul QDM is...
MAG543-BLK

MSRP: $14.95
Now: Now $14.20
Was:
MAGPUL QD Sling Swivel The Magpul QD Sling Swivel is a push-button quick-detach swivel for 1-1/4" webbing. It is compatible with QD sling attachment points. Made of manganese-phosphate finished...
MAG540-BLK